Boulder Dash and its many sequels continue to delight and challenge casual and hard-core players of all ages and both sexes! 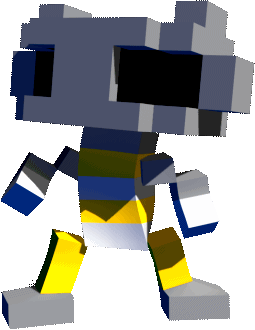 Boulder Dash ® is a classic video game starring Rockford™, famous for his blinking eyes and foot tapping. Once you are hooked, you keep coming back to this game for more, it’s so much fun, easy to learn; but, difficult to master! In 2011 Boulder Dash became part of the Smithsonian’s Exhibit: “The Art of Videogames”!

Though the graphics were a bit blocky, the caves were easy to navigate due to the excellent joystick controls and they ramped up in difficulty at just the right pace.  He quickly felt that even though he might fail at clearing a given cave it was due to his mistakes rather than things speeding up which was a common way to increase difficulty back in 1983. He quickly struck a deal with Peter Liepa; and, on October 28, 1983, First Star Software, Inc. purchased all rights to the Boulder Dash ® intellectual property in return for an advance against on-going royalty participation by Peter and Chris.

Richard and Peter also agreed to make some slight, but significant changes, such as increasing the number of color pallets as well as the introduction of small, non-scrolling, caves to be inserted every four caves as bonus levels. It has since become one of the longest ever running franchises in computer gaming as it celebrates its 35 anniversary in 2019! 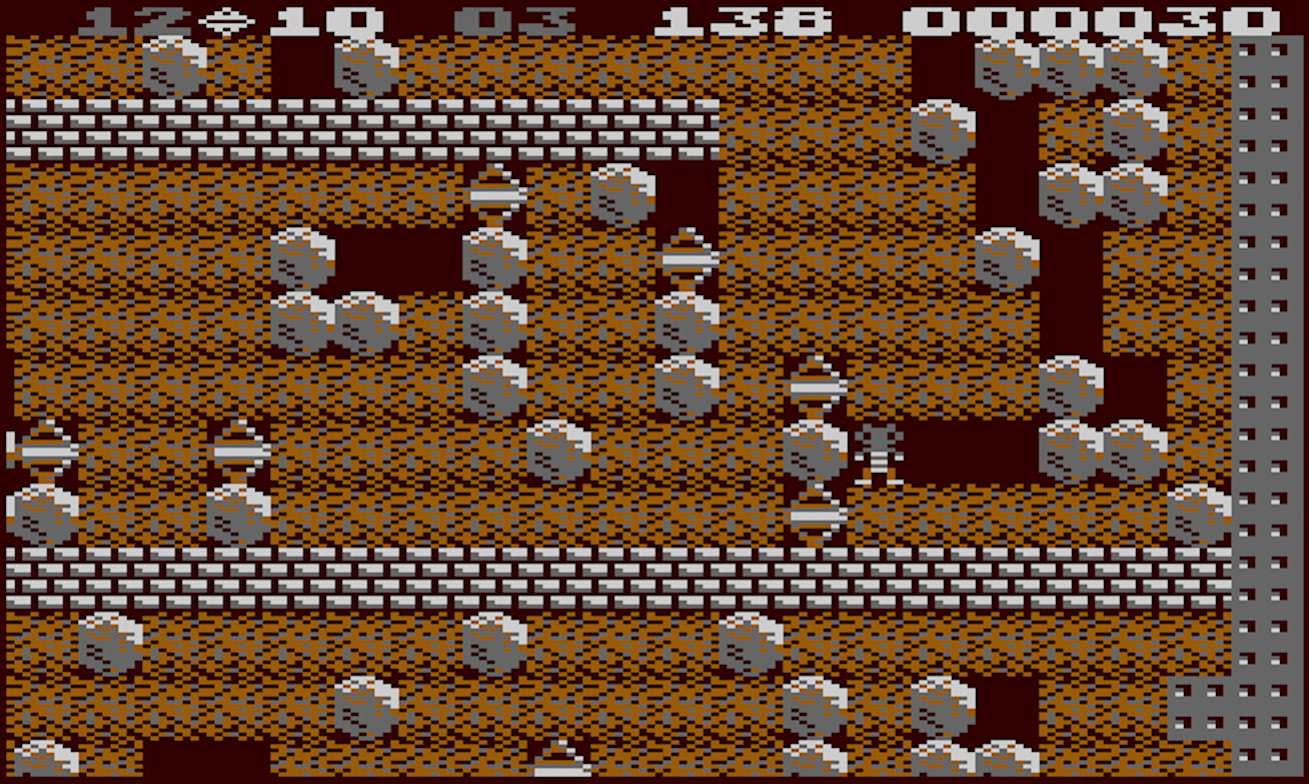 The gamer was enabled with the ability to grab, push, or dig from a stationary position in order to more easily collect diamonds while avoiding enemies or falling boulders, a feature that really added to the excitement of the game. Additionally, when positioning boulders so that they fell through magic walls, the boulders would turn into diamonds.  When boulders fell on Fireflies, the Fireflies exploded  barriers. If Butterflies were likewise killed by falling boulders, they too exploded, each turning into as many as 9 diamonds! The ever growing Amoeba, another in-game enemy, if not completely surrounded in time, turned entirely into boulders. But, if fully surrounded in time, an Amoeba turned entirely into diamonds!

Boulder Dash’s success truly started with the release of the Atari version, generating rapid growth also helped by magazines praising it. It was named “Game of the Year” by Personal Computer; “Atari Computer Program of The Year” by “Computer Entertainer”. Family Computing awarded it “Arcade Game of The Year”; and, Zzap Magazine”, with permission from First Star Software, Inc., even made the Rockford character their mascot, as he made regular yet random appearances in the magazine.

After its initial success on the Atari 400/800 computers, Boulder Dash® was published on other gaming platforms such as the Commodore 64, Apple II, IBM PC jr., then achieving great success across Europe and in Japan as well as North America.

Boulder Dash ® II, or Rockford’s Revenge™, was the first sequel in the series. While the sequel’s general game layout was very similar to the original, it included new elements. For example, certain walls expanded horizontally when they were dug out; and, blue slime was introduced which would briefly slow down falling rocks and diamonds, until they fell through it.

A Boulder Dash ® clone was created by “American Action”, a Swedish outfit, that they called Boulder Dash ® III. In an ill-advised deal, First Star Software, Inc. granted American Action an official license after being paid advance royalties. Things turned sour when the “space-themed” visuals American Action planned for led to a host of bugs making some levels impossible to complete; short-term commercial objectives seem to have rushed the developers.

First Star Software, Inc., however, averted permanent damage to the brand with the release of Boulder Dash ® – The Construction Kit™. Some were worried about offering an editor allowing fans to create their own games. However, since gamers could easily exchange cave levels created by them, the Boulder Dash® brand and the game’ popularity kept getting stronger.

Boulder Dash ® was a true early gaming pioneer being among the first of only a handful of really successful games designed for home computers. So much so that Exidy, a coin-operated arcade game manufacture, even created a special coin-operated machine cabinet that housed an Atari 600XL computer, called the Max-A-Flex system, that they placed in the arcades, with Boulder Dash ® as their lead Max-A-Flex game! This system allowed arcade owners to simply change the computer’s game cartridge rather than having to purchase new custom circuit boards or entirely new cabinet.  Thus, Boulder Dash ® was the first home computer game ever to be released into the coin-operated arcades after its initial release on a home computer! (Typically, until then, a game that was first successful in the arcades was then ported and released as a home computer game.)

Other software companies followed suit releasing three additional coin-operated versions of Boulder Dash ®. Data East released two coin-operated arcade versions; and, Mastertronic’s Arcadia Systems division commissioned a coin-operated game entitled Rockford™.  The game’s development was headed by Fernando Herrera, one of First Star Software’s co-founders and the author of the company’s first game: Astro Chase™ as well as its third game, Bristles™. Many of the caves in Rockford were designed by Fernando. Peter Liepa designed some of the caves for this game as well. The original arcade version of Rockford ran on the “Arcadia Multi Select System,” a Commodore Amiga 500-based system that could support multiple games. 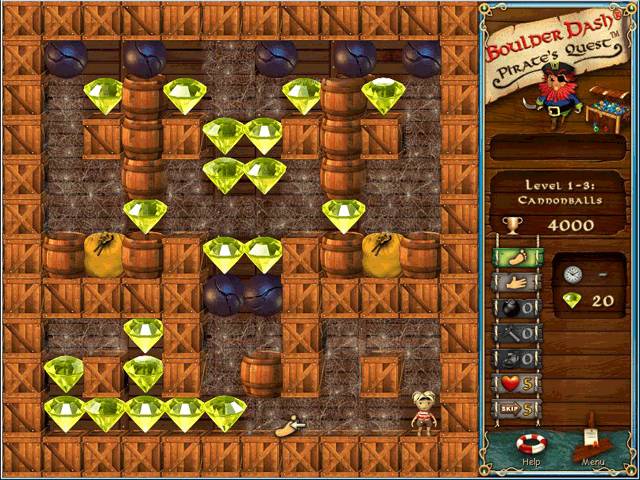 In some sequels player tools such as a boulder-smashing hammer; expanded reach – letting players grab boulders that were far away; a 90 degree screen rotation power-up; and, the ability to kick boulders long distances were introduced. These increased the player’s ability to combat enemies

The leaderboards of Boulder Dash ® – Treasure Pleasure™ and Boulder Dash® – Pirates Quest™ for PC increasingly showed women as top scorers, leading to a big change in the game – the introduction of Crystal™. A female character players could select if they didn’t want to play as Rockford!

Many find it amazing that the game is still alive and thriving 35 years later and a excited when they discover versions available for various game consoles, hand-held platforms; SmartPhones as well as for PCs and Macs.  For example, Boulder Dash ® XL™ is on Xbox 360 with stunning graphics, enhancing the game and keeping its look and feel up-to-date without losing the original feel. Others say that the Atari 2600 version is the best version ever.

Created by two Canadian programmers, Boulder Dash® has become one of the longest running videogame franchises thanks to publisher First Star Software. Mike Bevan looks at the history of a foot-tapping fella named Rockford and his various appearances through the years.  Read more …

The  evolution of : Boulder Dash

Boulder Dash behind the Iron Curtain

You can find out more about which cookies we are using or switch them off in settings.

This website uses cookies so that we can provide you with the best user experience possible. Cookie information is stored in your browser and performs functions such as recognising you when you return to our website and helping our team to understand which sections of the website you find most interesting and useful.

Strictly Necessary Cookie should be enabled at all times so that we can save your preferences for cookie settings.

If you disable this cookie, we will not be able to save your preferences. This means that every time you visit this website you will need to enable or disable cookies again.